Back in 1979 VME began as a bus system for the Motorola 68000. Within a few years it became a standardized bus in Europe and North America (ANSI/IEEE 1014-1987). Since then, designers at military and civilian avionics suppliers have used the VME architecture in thousands of test and simulation systems, and many of these systems require MIL-STD-1553 and ARINC 429 avionics bus interfaces..

With a sizeable global installed base and the ongoing requirement for test and simulation of legacy avionics products, VME-based systems will remain in active use well into the future. The reasons are simple:

In short, VME-based systems remain functionally robust, and there is no compelling technical or economic reason to invest in new form factors—particularly in testing or simulating legacy avionics.

Nevertheless, VME has been around a long time and subsystem and component end of life (EOL) issues loom large.

Most VME systems in use today employ the PCI bus (or its variants) to control and communicate with VME-based instrumentation. A carrier or adapter board accomplishes the translation between the PCI and VME environments. The traditional heart of these adapter boards—including those from AIT—has been the TSI148 VME to PCI-X Bridge chip. 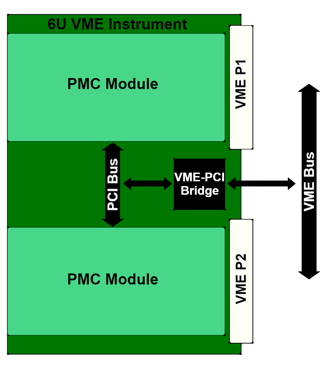 However, the TSI148 has been obsoleted and is no longer supported by its manufacturer. TSI148 obsolescence presents a dilemma to both users and their suppliers, who are committed to keeping these VME systems in operation for another ten to twenty years.

How Not to Solve the Problem

One approach (already taken by some VME suppliers) has been to simply cease building or supporting VME-to-PCI adapter boards, forcing their customers to find support elsewhere.

An alternative but still unappealing solution would be for VME system suppliers to scour various sources, attempting to buy up scarce (and expensive) TSI148 inventories. This strategy would enable ongoing customer support but at a high cost and above all, an uncertain future. Scarcity also translates to long lead times and a high risk of VME-to-PCI adapter board EOL happening sooner rather than later. After all, once chip inventory is exhausted the original problem simply rears its head again.

We’ve already observed that both commercial and military VME users will continue to require long term VME legacy support for another one or two decades, whether the reason is contractual, economic, or both. Customers lacking internal design engineering resources to implement a long-term fix to the TSI148 problem are likely to demand that their VME suppliers to solve this and other EOL problems as they arise.

But unless AIT achieves VME-to-PCI bridge functionality in the absence of the TSI148 chip, all the other requirements become moot.

AIT has redesigned its VME 1553 and 429 adapter boards to use a Xilinx FPGA that incorporates AIT-developed and owned intellectual property (IP). This hardware and firmware—the “FPGA solution”—resolves the adapter EOL issue by eliminating the TSI148.*

AIT’s practical solution is not a gauzy promise of a future product development. The FPGA solution proves our long-term commitment to 1553 and 429 VME test and simulation systems—exactly what’s needed for VME users to continue to rely on their VME investment.

We’ll discuss the how AIT’s VME-to-PCI solution is an example of AIT’s long term commitment to VME in our next blog post.

* Of course one could argue that Xlinx could discontinue supplying its FPGA. However, given its widespread use in thousands of applications, we this EOL risk is diminishingly small. In any event, since AIT owns the IP, it could easily port the firmware to an alternative device.